Most of us may have heard of a gluten-free diet but many of us are not very clear as to what it really means. The dictionary meaning for ‘gluten’ is, a tough substance that remains when any grain (e.g. wheat) is washed to remove the starch. Gluten is a protein made up of two protein groups – glutelin and gliadin and is present in cereal grains like wheat, rye and barley and products based on them. Also, food like bread, pasta, noodles, pizza, crackers are gluten containing as also junk food like desserts (cakes, cookies, brownies), and biscuits, waffles, candies, etc. Processed foods containing malt / malt flavoring, salad dressings, mayonnaise, etc. too are said to contain gluten. Sauces and gravies using wheat flour as a thickener also contain gluten.

Foods that fall in the ‘safe’ or gluten-free category are cereals like rice, millet, quinoa, sorghum and flours of rice, soy, corn, potatoes, etc. Naturally available food like meat, fish and poultry products, fruits and vegetables are totally free of gluten. 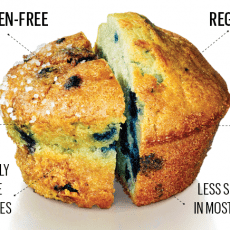 So then, one wonders, why has this term ‘gluten-free’ become so popular, since the last few years, that a gluten-free diet has almost become a craze! Normally doctors recommend a gluten-free diet when treating patients having Coeliac disease (CD). Sufferers of this disease – a digestive disorder – cannot have foods containing gluten else it causes severe inflammation in the small intestine. This can lead to health issues like weight loss, fatigue, bloating and pain. While CD is said to affect a minuscule 1% (of the American population) its numbers appear to be on the increase.

Alongside these patients, is the growing tribe of gluten intolerant people, better known in the medical fraternity as people with non-celiac gluten sensitivity (NCGS). These are estimated at approximately at 6% of the population. Yet, this piece of statistic too doesn’t completely explain the rising popularity of this diet, which many terms as a ‘fad’ or as an unsustainable trend. The real numbers lie in the number of Americans who follow a gluten-free diet purely from being perceived as ‘healthy’.

The diet’s popularity stems largely from media coverage given to celebrities like Novak Djokovic, who came out in favor of a gluten-free diet and other celebs like Miley Cyrus revealing that she has a gluten ‘allergy’. Publication of a cookbook by Gwyneth Paltrow along with other books on the subject has only fueled further interest in this diet.

But, dieticians and nutritionists advise caution saying that a gluten-free diet isn’t for the rest of us. They suggest consulting one’s family physician for an evaluation. Besides, gluten-free products are made with refined grains which can be low in fiber, vitamins and minerals. Which can lead to deficiencies in nutrients, such as calcium, folate, zinc, etc… Also, some of the processed gluten-free products tend to be high in salt, fat and sugar content. While this is mostly to make them taste better it negates the healthy aspect of this diet.

© 2016 by DietFind.com, an LiVenture.
All rights reserved. No part of this document may be reproduced or transmitted in any form or by any means,
electronic, mechanical, photocopying, recording, or otherwise, without prior written permission of LiVentures.